Last week was one of those weeks where time just got away from me. I was jet lagged coming back from Germany (accidentally waking up at 3 am all week - oopsie), work was really busy and then a pile of regular life stuff needed attention -- posting outfits didn't make the priority cut. (Hmmm if I think I'm busy & sleep deprived now... what in the world is going to happen once there's a mini human at the top of the time-suck list? Eep!)

This week is looking a lot better time-wise on every front! I've even taken about 2/3 of the photos for my "Maternity Work Capsule Wardrobe" that I'm finally going to post next week! Yay me!

Picked this dress up at Target and I've been wearing it basically ever other day since I bought it. Two wrap style dresses I initially picked up from Asos worked well for a long time but now that my chest has grown I've had to start wearing camis underneath them and lately I just don't want to deal with a second layer. This dress is awesome. It is like a pair of jeans in that it goes with everything. Every color cardigan, fun colored jewelry and any fun accessories easily work to change the look of a very comfortable and basic dress. Great buy! 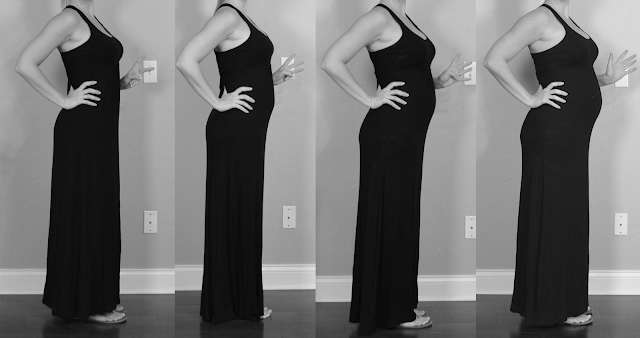 Post 8/8 - The purpose of the "One Suitcase" feature is to try to show you how you can pare down your packing list when you travel without sacrificing the number or variety of outfits you have for the range of activities your trip may entail. I have learned through trial and error (and the pain of lugging wayyy too big a suitcase) that by packing a few favorite & versatile pieces of clothing I can mix and match the items into a surprising number of outfit options. You just have to do a little planning up front. Hopefully the posts this week will show you my method and help you find the potential of the clothes you already have in your closet! In case you missed it: Introduction to One Suitcase & 14 Clothing Pieces Outfits 1-5  Outfits 6-10  Outfits 11-15  Outfits 16-20  Outfits 21-25  Outfits 26-30 Checklist - Here's a checklist/graphic that could help you pack or reference outfit combinations! The method:   1. Basics - First I

Post 10/10 - Between my job & my love of seeing new places around the world I spend a fair amount of time living out of a suitcase. From all the experience I have gained from hauling myself & my stuff all over the place I have learned just how valuable packing smart & packing light is to your sanity. And I think I have gotten pretty good at selecting just my few favorite pieces of clothing to bring and stretching their use though multiple outfits for multiple activities as I travel. So for this second installment of the one suitcase feature I'm going to try out a beach vacation capsule wardrobe. The purpose of the "One Suitcase" feature is to try to show you how you can pare down your packing list when you travel without sacrificing the number or variety of outfits you have for the range of activities your trip may entail. I have learned through trial and error (and the pain of lugging wayyy too big a suitcase) that by packing a few favorite

**Updated to include pinnable checklist below** Looking back at my travel posts thus far ( one suitcase series and how to pack for work travel ) they give a lot of inspiration and information but they don't quite have the easy, no brainer now how do I actually do this myself type help. So I thought it might be useful going forward to summarize, item by item in checklist form (and I looooovvve checklists so this makes me really happy), what I actually pack. That way it'd be easy just to follow the list to confirm you're on the right track (maybe not 'right' but at least what works for me) when you try to pack yourself. And of course a checklist will answer the very important question that I get after every. single. One Suitcase post... Do you pack UNDERWEAR?? I don't see them in the picture!! OMG where are your BRAS!!? To start off my first checklist type post, I think I'll do a shorter list to help me get the format right. I've had quite a